Student's Fascination with People Led Him to Spain

“My entire experience in Spain revolved around people,” he said. “Not places, buildings, or language. I have always been fascinated by people, and always strive to meet new people and understand them as wholly as I can. Because of this, the inspiration to study abroad came quite naturally. I see a world which is full of people whom I don’t know, and I actively choose to spend my life trying to meet them.” 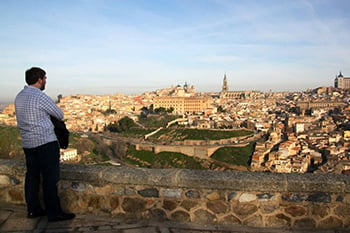 A history major with a concentration in secondary education, Michalak was also attracted to the author Ernest Hemingway and his exploits in Spain.

“I had been taking Spanish throughout high school and college, so I knew that whatever country I chose would have to be a Spanish-speaking country,” he recalled. “I also happen to love reading Hemingway, and I remember reading The Sun Also Rises and reading about his experiences in Spain and wanting to experience that for myself. I also knew he loved bullfighting, the culture there, and that Spain was a major influence for a lot of his writing. I figured something there was special. And finally, I chose Seville because I did not want a large city, but rather as authentic a city as possible. Seville, I would soon learn, is in many ways a hub of Spanish culture. When I took all those things into account, and then spoke with my wonderful study abroad advisor, Tracey Sarefield, I knew that Seville, Spain was where I’d be spending four months of my life.”

Michalak, a native of Feeding Hills, MA took four courses while studying overseas, helping him hone his Spanish-speaking skills (which were further burnished by conversing with his host family) while broadening his horizons as a citizen of the world.

Realizing I'm a part of a larger human experience

“I learned more about the global community in which I live,” he said. “Before I went, I couldn’t conceptualize the fact that other people lived so far from me. They existed in my mind as characters you read about in the news, rather than living, breathing, human beings. By living and traveling abroad, I began to understand that I am part of a larger human experience. Also, it has sparked within me the desire to travel to other places, both nationally and internationally.”

Michalak also visited London, Paris and Krakow during his three and a half months in Europe, but thinks too many students who travel abroad wrongly focus on amassing a checklist of countries through which they’ve passed. To him, that misses the point of studying abroad.

“This opportunity meant learning more about other people, other societies, and other places,” he said. “It meant confronting challenges, and seeking the limits of my abilities and pushing them further. It meant removing preconceived notions about people and places, and choosing to understand from the perspective of others, rather than from my own.”