The Truth About Frankenstein ... Well, Sorta!

I am currently enrolled in Approaches to English Literature. The class is devoted to learning about various ways we can study literature, and we're reading Mary Shelley's Frankenstein.

Going into the class I knew four things about Frankenstein: 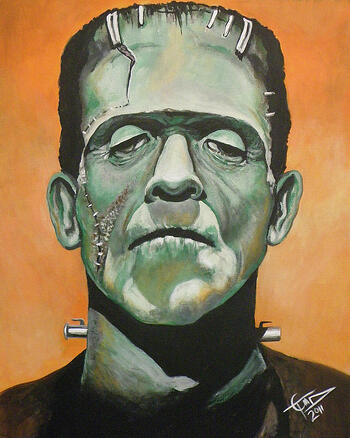 The point is, I didn't know anything going in. Now strap in because I'm about to give you a very brief and probably a very inaccurate summary of Frankenstein!


Frankenstein's creator was a weird dude

There are letters at the beginning, I'm going to tell you now, read them, seriously, I didn't realize that it was actually part of the book, so I had to go back. They're about a lonely guy on a boat in the Arctic.

The main character is Viktor Frankenstein. Viktor's dad met his mother in the romantic location of a shack with her dead father in it. Several years later they married and had a kid. A little while later while they walked around helping the poor in the countryside, Viktor's mother sees a poor family with all dark haired children except for one blonde child.

Viktor's mom is like, "Hey she's cool, can I have her?" and her mom is like "I mean she's actually an orphan I promised I would take care of but sure, I guess." So they go home and now Viktor has a sort of sister who he calls his cousin who he has a crush on. Viktor gets really into science like in the way that people his age would get into Legos, except playing with Legos doesn't lead to you sewing animals and people together and creating an eight foot tall monster.

Anyway, what happens is Viktor is about to head off to college even though I'm fairly certain he hasn't done anything but read science books and have a crush on his sister/cousin/girlfriend for the last eighteen years. He gets there and all of his professors are like, "Whoa man, you've been reading alchemy books, not science books." So Viktor throws himself into his studies.

If you build it, it will run away and kill someone. Oops!

Now here's where I get a little lost. Viktor decides that he will build a huge creature and bring it to life. What's confusing to me is how he managed to go through with it. It's not like when you say something on impulse and wish you could take it back, this took a long time, there were plenty of opportunities for him to think, "You know this is definitely a really bad idea."

The most modern day example I can think of is The Human Centipede. The person who thought up the plot line of that movie was able to convince other people that it was a good idea, and then they had to find actors and actresses to also agree it was a good idea and then studios and camera men and a vast array of other people had to say, "YES! We need a movie about people connected in that way." Then enough people had to watch it to fund a second one, A SECOND ONE.

Anyway Viktor makes the monster and then regrets it (imagine the regret you feel after eating Taco Bell, it’s like that). Viktor goes to meet his friend the next day and when he gets back the monster is gone and he’s like “PROBLEM SOLVED” but then he kind of freaks out and his friend needs to nurse him back to health. Moving on from that, Viktor plans to go home when he hears that his brother was murdered and upon returning home he realizes the monster killed his brother. He then sees his old friend executed for the crime, naturally he falls apart again.

Peek-a-boo, I found you!

Then one day while riding through the Alps, you know because people do that in the middle of the winter, he sees the monster again. This time he talks to the monster. I repeat the monster can talk, I had no idea. The monster takes him back to his cave where they catch up. The monster, who is made out of human and animal pieces has managed to learn French in the last several months. I am a humanbeing not sewn together and with no animal parts that has taken French for three years and still can’t speak a word of it.

The monster explains that he killed Viktor’s brother because all humans hate him. He goes on to explain that he was spying on a family in a cabin who he loved and held in the highest esteem. He decided to try to make them love him (that is way creepier sounding than I intended) by first speaking to the blind father. If he could win him over the father could then convince his adult children that there was more to him then his looks. This doesn't work because when the children get home they just see what I assume looks like an eight foot tall naked man grabbing their father’s knees. Frankenstein then asks for a wife. That’s as far as I've gotten.

Overall the class is interesting. I never realized how much could go into analyzing what an author meant by specific details of a book. The various techniques all give different answers and are a lot more specific than anything I've just written. As I've been going through this semester I've been learning less about how the words you choose and the order you put them in can really control how your writing comes across, which is very intriguing to me. I'm really enjoying my three English classes this year.

Do you like to read? What's your favorite book?