Reid and Kayla on Mars

With Mars in the news this week after researchers described evidence of liquid water on the Earth’s nearest planetary neighbor, we look at some Martian research taking place on our own campus.

The project involves determining the size and shape of ice deposits on Mars in order to explore how changes in the past climate resulted in their formation. 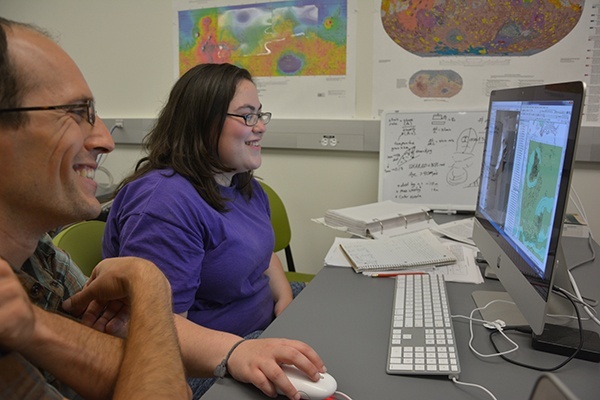 “Kayla’s been diligently mapping out where these ice deposits are located and how big they are,” Parsons said. The project uses data from NASA’s Mars Reconnaissance Orbiter launched in August of 2005 and also from the Mars Express orbiter launched by the European Space Agency. “Something pretty huge happened on Mars to create these ice deposits. When did that happen? How and where did the ice precipitate out of the atmosphere?”

The answers will take a lot more research to discover, Parsons said, and additional Mars probes would be needed to get definitive proof – such as drilling deep ice core samples, which existing probes cannot do.

This week’s news of liquid water on Mars relates to Parsons’ and Kress’ study in an important way. “It confirms that there is frozen ice buried below the Martian surface, and that it can periodically melt and produce these dark streaks on the landscape. The features we are studying are also buried ice deposits, but are likely to be much thicker and contain ice which is more pure, with less dust and salt mixed in.”

The Martian ice in their study is closer to the polar caps and has remained frozen for millions of years, he added.

Kress enjoyed her summer of analyzing reams of data. “I got to fly around Mars all day,” Kress said. “It’s been an experience. I feel like I’ve gained a lot of information on how scientific projects are run. And I got paid.”

Kress said she is interested in exploring career options with NASA or the U.S. Geological Survey. “As long as it has to do with science, I’m good.”