Nick Wilson has always entertained dreams of being a history teacher, and figures a good way to learn about it is to live it. So he’s spending six months this year in the Czech Republic, studying its language, history and environment.

“Travel is something I plan to do because there’s no better way to learn than to go there, see it, and interpret it for yourself. I hope that by the time I’m 30 I will have lived on each continent.” Europe is the second continent he’s seen (after North America). “So, only five more.” 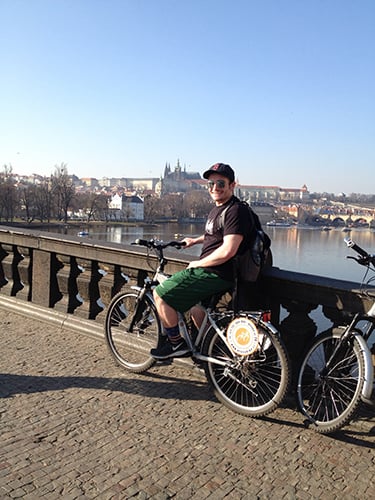 The Shirley, Mass., native is majoring in middle school education and history. He is paying for his study abroad through part-time teaching jobs and working as a mechanic while overseas. It’s been a life-changing experience.

Addicted to travel—it's a good thing

“I always knew I wanted to travel, and now I’m addicted,” he said. “I’d never been on a plane, lived in a city or spoke another language before, so getting those big first times out of the way was a great feeling. My goals in life are to learn and become a teacher, so this is a small step for me. It’s like a little taste of the pie, but now I know I need to go every place I can and accomplish my goals.”

Wilson, who will graduate in 2015, had a romantic idea of what study abroad would look like, and made it happen.

“I always wanted to get off the plane with nothing but my bags and no idea what to do,” he said. “I had a job within a couple weeks (of arriving in the Czech Republic) and had made great local friends, and it was the best choice for me. I really wanted to experience it from the perspective of an immigrant, not only a student. I’m most proud of that first month, because being able to establish myself as a self-sustaining person in a city where I can’t speak the native language made me proud.”