Ran for the Record and Never Looked Back

Chris Kibler’s first glimpse of Fitchburg State came on the track, and in a way he’s never looked back. He first competed at Elliot Field as a high school student from Bath, Maine.

“The facility was just gorgeous, so I looked into what programs the school had to offer,” Kibler recalled. He visited Fitchburg State three or four more times in the ensuing months. “Each time, it felt more like home.” 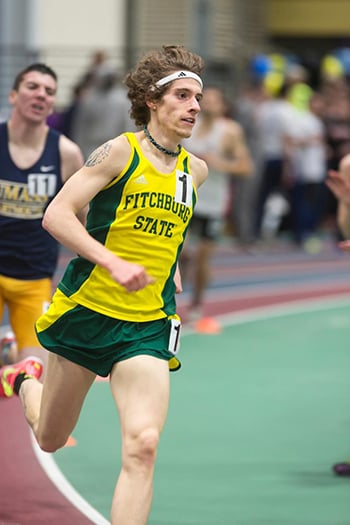 Kibler certainly was at home on the track, amassing several records, which continued even after he graduated with a degree in Exercise and Sports Science in 2012. He returned to competition as a graduate student, finishing his athletic career this spring. Earlier this year Kibler was named the Paul K. Waring ’38 Male Athlete of the Year at the annual athletics awards banquet.

Track career filled with many awards and many rewards

This year alone, Kibler ran the seventh-fastest mile in the NCAA Division 3 competition, as well as being named the ECAC Mile Champion, qualifying in the mile for the NCAA National Championship and being named as an All-American by placing sixth at the NCAA’s.

Kibler—who said he’s now in the best shape of his life—looks back on his sophomore year (2010) as a turning point in his athletic career. “That was my first real breakout season,” he said, recalling a MASCAC championship. “Nobody really thought that would happen. That helped our team win our first outdoor championship in about 20 years.”

It takes a great deal of mental and physical effort to succeed at that level, Kibler said.

“One of the reasons I’ve been so successful is I’ve been self-motivated,” noting runners in particular need to cultivate that sense of dedication.

He said Coach Jim Jellison has been an important figure in his development. “He’ll just believe in you more than anyone else, more than you’ll even believe in yourself,” Kibler said. “Without that mindset being driven home, I’d never have run the times I did.”

Kibler’s finished his collegiate eligibility, and needs just three more courses to complete to earn his Master’s of Business Administration. He’ll continue his work as an assistant coach at Fitchburg State, and dreams of one day working as a head coach at an NCAA institution.

“The bottom line is, I don’t think I’ll ever leave collegiate sports.”

Are you interested in participating on a sports team at Fitchburg State?