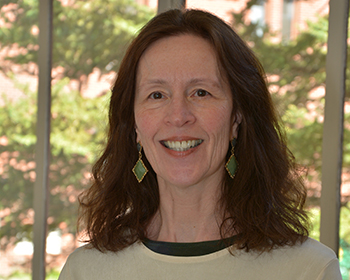 The Miller Award was established in 1955 in honor of the state senator and member of the Board of Education, who is considered one of the three founders of the State Normal School in Fitchburg (which was later known, of course, as Fitchburg State). Miller Hall is also named after him. The award is given to an educator who has demonstrated originality in their profession, given unselfish devotion to the profession and exerted an influence for good among their students.

Rosa has worked in the field for 32 years, including 15 years spent as an elementary and secondary education classroom teacher in Massachusetts, New Hampshire and, briefly, the United Kingdom. She has been a full-time faculty member at Fitchburg State—teaching in the early childhood, elementary and middle school programs—since 2006.

The Miller Award is traditionally given to teachers focusing on elementary and secondary education, but Rosa’s work with students at the McKay Arts Academy—located on the Fitchburg State campus—warranted recognition. She created  a math mentors’ program to support at-risk third and fourth graders in 2009, a program that is still being implemented with Rosa’s support. She also developed an eight-hour, content-driven workshop for early childhood teacher candidates preparing for their Massachusetts licensure exam.

Interested in teaching? Check out our education department to see what opportunities are available.