The title says it all—Writing Screenplays is Hard!

For the spring semester of my sophomore year, I decided to take a writing for film and video course. In the course description it says that you work throughout the semester on a feature-length script, which is 120 pages. I figured it would be a challenge, but this has been one of the hardest things I've done in filmmaking.

I give a lot of credit to anyone who writes screenplays professionally. This is the first time that I've ever attempted to write a feature-length script. You need to come up with a conflict and characters that people will actually care about and that can sustain for two hours. I've come up with a treatment, character bios, and now I'm starting to write the actual script, which I'll be working on until the end of the semester. 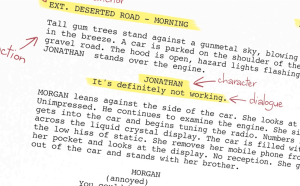 In writing for film and video, we discuss Blake Snyder and his infamous "beat sheet" - a guide that says when certain plot points happen in a script. It's interesting to see how accurate his guide is for virtually every film.

While this class has been very challenging, it also has been extremely informative. It has helped me better understand the construction of a story.

So, if you're looking to write scripts, I highly recommend checking out this course.

What would you write a screenplay about? Tell me about it in the comments below.