Throwing the Winning Pitch on the Field & Beyond

Kerry Alcott of Groton also completed her distinguished Falcon career this spring, but not before setting a number of records as a member of the women’s softball team.

Alcott originally enrolled at Westfield State, but transferred to Fitchburg State two years into her career. 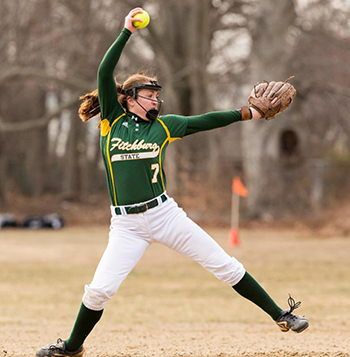 “A lot of factors influenced my decision to transfer, among them was the school’s amazing special education program,” Alcott said. “I also played softball against Fitchburg State and witnessed an incredible team atmosphere and I very much wanted to be a part of that.”

Time management is key to being great scholar-athlete

Athletics have been a major part of Alcott’s life since elementary school, and by the time she reached high school was conditioned to balance academics and sports.

“For me, it was always a matter of strong time management skills,” she said. “If I had an extra 20 minutes before practice or a game, I was doing homework. There were many late nights and early mornings, but I don’t think I would have been as successful in academics if I didn’t have my other commitments that forced me to manage my time so meticulously.”

At Fitchburg State, Alcott ranks second all-time with a career earned run average of 1.97, and ranks sixth in wins (19) and fourth in strikeouts (281). This past year alone she led the team in several categories, from ERA (1.62), innings pitched (104), appearances (20), strikeouts (147) and complete games. For her efforts, she was named (along with sophomore Marissa Gemma) to the MASCAC All-Conference Second Team.

Looking back at an incredible career

Alcott looks back fondly at her final year representing the Falcons.

“The moment that sticks out most to me for many reasons is Senior Day, which took place on April 24 against Nichols College,” she said. It was on that date she broke the school record for strikeouts in a single game, with 15. “I could not have asked for a better way to end my time at Donna Withington Field.”

Being named the Paul K. Waring ’38 Female Athlete of the Year at this year’s athletics banquet was also a notable achievement. “There are so many talented and dedicated student athletes at Fitchburg State that I look up to, and who are deserving of this award,” she said. “I am so honored to have been recognized by the university for my commitment to athletics.”

Alcott credits a wide support network of family and coaches for playing instrumental roles in her success.

“The support I received from my family is a huge aspect of my athletic career,” she said. “My parents spent hours driving me to tournaments, cooking late night dinners after long practices, celebrating with me after huge wins, and comforting me after huge losses. I truly owe them the world for everything they’ve done.

“All of the coaches that I’ve had the pleasure of playing for have helped me develop as a softball player as well as an individual,” Alcott continued. “The coaches that I’ve played for at Fitchburg will always hold a special place in my heart. My two years on this team were two of the best years of my softball career and the coaches were a huge part of that. Their enthusiasm for the sport and desire to make their players better is unmatched by most. Finally, I am so grateful for my teammates, past and present. Softball has given me the opportunity to meet hardworking and talented young women who started out as teammates, but ended up as family. Years from now, I’m sure I’ll forget scores, plays, and errors, but I will always have irreplaceable friendships.”

Alcott is now applying for several jobs in area schools, armed with licenses in special education and elementary education.

“There is a lot of unknown that comes with graduating from college,” she said, “but it’s very exciting and I can’t wait to see what doors open for me.”

Do you aspire to be a college athlete?