The Coolest Journey Of My Life

Hello! I would like to say first and foremost that it's a pleasure to be able to document and share my experiences abroad with the Fitchburg State community!

My name is Jordan Malachi, currently a junior Communications Media Film/Video student. Throughout these posts I am documenting my sophomore year of college spent studying abroad at Tsinghua University in Beijing, China.

This was honestly the most anticipated and, frankly, coolest journey of my life so far.

How it all began 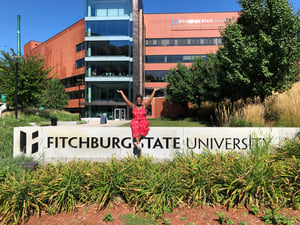 My enthrallment with Chinese culture, language, and art dates back nearly a decade. I attended a small school in rural New Hampshire where I received a letter one day inquiring about my interest in taking a Chinese language class, as the high school down the street was to begin offering one.

My first thought, like any twelve-year-old, was “Why Chinese? What about a ‘normal’ language? French or Spanish maybe?”

Luckily my parents intercepted this thought pattern and signed me up for the class, stating that it could open up a lot of doors in the future.

Of course, I had no idea what they meant at the time but I am so grateful they pushed me out of my comfort zone. After the first week of class I was in awe. My teacher was so passionate about the language and culture (she was Chinese). Her enthusiasm for teaching was something I had rarely seen early on in my education, and so I was immediately drawn to it.

There were about five students in my class so we received extremely individualized attention, which is important when learning such a challenging language. And something about this magical country struck a chord in me. As we had our final Chinese class of that year, I told my classmates I planned to visit China one day. And, in true seventh grade fashion, none of my classmates gave the idea much thought. But that didn't matter--I had planted a seed that day.

Since that class, I became adamant about trying to involve Chinese language into my curriculum. After that year my family moved away from our small isolated town to a slightly less isolated town. Once in high school I arranged my schedule to study Chinese online and receive credit for it. I tried finding ways to go to China in high school but met with many obstacles. I knew that I owed it to myself to follow my passions wherever they led.

When picking colleges, I looked for an affordable school that had two things:

It was surprisingly difficult! Then I stumbled across Fitchburg State. My mother’s co-worker had praised the film program and I saw they had a partner school in Nanjing, so I eagerly applied as was accepted soon after.

In my very first semester there, I met with the Study Abroad Advisor and informed her that I wanted to go to China for an entire academic year, but I had no idea where to start and barely had enough money to pay for college. Thankfully, she was an intelligent and well-connected woman. While the partner school in Nanjing wouldn’t fit into my curriculum, she found a different program for me, unconnected to that school.

My advisor alerted me of a scholarship from the Chinese Government for about ten thousand dollars, which I applied for on a whim because, let's be honest, who wins scholarships that big? Turns out, I do! Receiving that scholarship was one of the most promising days of my life. It meant not only that I could go to China but, I could go with tuition, medical coverage, room and board all paid for, in addition to a $500 stipend every month. I also received the Benjamin A. Gilman scholarship, which has helped me tremendously with travel expenses.

Simultaneously, I was overseeing the editing of a short film I had created as a passion project. As I left my first year of college, not only had I written, directed, and co-produced my own short film without attending any film classes, I was on the road to accomplishing a life-long dream!

I felt pretty good about the process, but that’s exactly when the universe kicks you! I found out the study abroad program I had chosen to study with wouldn’t accept my scholarship, meaning I had to find $17,000 dollars (per semester) to study overseas!

I am definitely not an impoverished person, but I am working within a strict student budget and that’s a lot of money. Even after financial aid it was still too expensive for me. My father tried to sign up for a loan and got denied, confirming my worst fear: I would have to withdraw from the program, register as an independent student, and travel to China completely alone.

Tsinghua’s offices were closed until late August. So I waited for two months praying to any divine entity that would listen to please make this work. I was in an precarious situation because my father was denied for that loan, meaning if China didn’t pull through, I wouldn’t have even been able to go to Fitchburg State the following semester. Thankfully, my worries were unwarranted and I received my admission notice to Tsinghua, the top university in China. I booked my flight, and was even able to visit Fitchburg State to show my crew our finished film before I left!

One thing a lot of people have been telling me is how lucky I am to be going to China and, while yes some of it is luck, this trip was ten years in the making. It was all my hard work finally paying off. If you retain anything from this blog, retain this: your work ethic can take you as far as you let it.

Getting on that plane I had no idea what amazing, weird, sad and distinctly Chinese experiences were before me, but I am honored to be sharing it with all of you! I hope you'll join me on this retroactive journey through my year in China, with detours to Vietnam, Macao, and Hong Kong.

And who knows, maybe next year I’ll be reading your blog!

Are you looking to Study Abroad while at Fitchburg State? Visit the department of International Education online or send us an email.