This past week, the Center For Diversity And Inclusiveness took over our art gallery in Hammond to set up their own exhibit. It was an a very important display of photographs that really took people by surprise. The photographs showed some of the intolerance and prejudice that our students had endured in their lives. This powerful show really provoked a lot of good discussion about how we as a university can stop this.

#ITooAmHarvard gets the Fitchburg treatment.

Jamie Cochran, head of the Center For Diversity And Inclusiveness, had an idea to recreate and reappropriate the #ITooAmHarvard campaign. This series of photographs students at Harvard did showed members of their African American student body writing things people had said to them that were prejudiced or intolerant on a white board and having their picture taken with the hashtag #ITooAmHarvard. What Jamie and the people at CDI decided to do was to recreate the campaign with the students of Fitchburg State. The campaign was opened up to anyone who wanted to participate, so it was not just limited to African American students.

#ITooAmFitchburg showcased all sorts of people.

The student body at Fitchburg State is very diverse and has many different types of people. This campaign allowed students to speak out against discrimination in all forms, from racism, homophobia and sexism to discrimination against veterans and those with mental diseases. There were even photos that asked the question if they were allowed to participate because they were not of minority status. 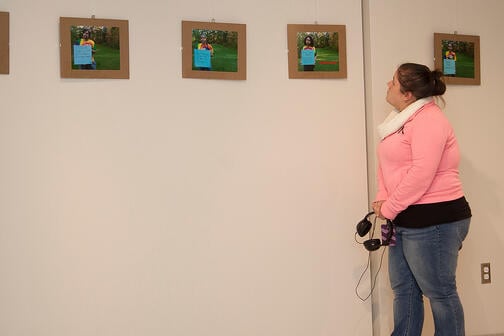 The #ITooAmFitchburg campaign showed the students of Fitchburg State that there is still adversity and challenges in the world for people based solely on who they are. When students entered the exhibit, there was a book on a pedestal where people could write their thoughts on the exhibit and photos that were shown. All of the comments written down were positive, saying how they won't allow this to happen on their campus. This shows that Fitchburg State has a student body that won't allow anything unwanted on their campus. Having this exhibit on display at Fitchburg State made me proud to call this university my school.

What do you think of the #ITooAmFitchburg campaign?