Fitchburg State University's Game Design program has seen a lot of success in the relatively short time it's been offered. Our continuing "Meet the Faculty" series is happy to introduce Jon Amakawa, from Communications Media.

Tell us where you completed your academic studies.

I completed my undergraduate degree at Vassar College where I majored in History and also studied Fine Arts. I completed my Master's Degree in Communication Planning and Information Design at Carnegie Mellon University. It was in graduate school that I first began working with interactive media, virtual reality and game design, and exploring ways of using technology to present museum exhibitions and cultural heritage. Carnegie Mellon was fertile ground for exploring these areas given its high levels of research in interaction design, robotics and game design at the Entertainment Technology Center and easy access to major cultural institutions like the Carnegie Museum of Art. 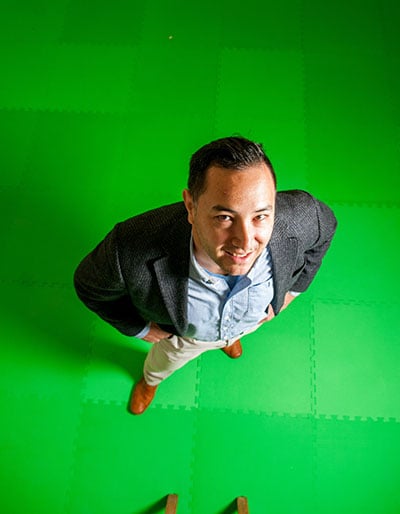 What are your research interests?

I am currently developing the New Philadelphia mobile history app in collaboration with the Illinois State Museum, the New Philadelphia Association and the National Park Service's Network to Freedom Program. The project involves an interactive app for the iPhone and iPad that a visitor can access prior to or during their visit to the New Philadelphia site. The site is historically significant as the first town in the United States to be founded and planned by a freed slave and African American by the name of Frank McWorter. Unfortunately little remains of the town today. The project will make use of augmented reality technology which will enable visitors to view the town as it appeared in the mid-19th Century (via their mobile device) and see 3D reconstructions of long gone buildings in their former locations when touring the site. The overall aim of the app is to provide real-time visual and informational context to visitors while walking through the New Philadelphia site.

One exciting aspect of the project is that the New Philadelphia site is located halfway between the Springfield, Ill Lincoln Home National Park site and Hannibal, MO, the birthplace of Mark Twain. An improvement in the visitor experience at New Philadelphia has the potential to create a vibrant tourism corridor between all 3 sites.

What attracted you to Fitchburg State?

I was drawn to Fitchburg State's strong Communications Department and the exciting opportunity to help build a new Game Design program. We are at a point now that a number of universities and colleges are starting up Game Design programs. I strongly believe that Game Design programs need to balance both artistic practice and theory in order to cultivate graduates who will make an impact in the game industry of the future. As an emerging medium, I believe game design can learn a lot from the long running success of the other media arts disciplines at Fitchburg.

What have been your impressions of the campus community in your time so far?

In my first year so far, I have found the community to be very open and welcoming. I feel privileged to be a part of a community where there are people with such a range of specialized knowledge and interests from exercise science to architectural history. I also immediately got the sense, when I first started at Fitchburg State, that the people here cared deeply about the institution and this is reflected in the campus community's deep involvement in many aspects of decision making.

Please describe your approach to teaching, and what you believe makes an effective undergraduate professor.

I am a strong believer in inquiry-based, student-oriented and hands-on arts education. I believe that student artists need to cultivate a sense of curiosity and explore unfamiliar subjects, in art, history and culture, in order to grow and develop as artists.

I also believe that students must be equipped with the skills to research and learn about new subjects—just as they may learn to do research papers. In the case of my 3D Modeling classes, I have students create game environments based on particular historical settings. In each example, students are initially confronted with an unfamiliar subject and have to immerse themselves in that subject. One of the main objectives for this approach is to mirror the way in which professional designers work with new clients and familiarize themselves with new fields during the design process.

Anything else you would like the campus community to know about you?

Hmm. An interesting factoid that many people wouldn't know about me is that I once spoke with a Jamaican accent--no joke. As a child, my family lived in Kingston, Jamaica for a few years. I have long since lost the accent but still have a soft spot for Jamaican breakfast porridge.