Steven Edwards, english studies assistant professor, was awarded $10,000 from the Massachusetts Cultural Council as one of its 2014 creative writing fellows.

Edwards has been an assistant professor at Fitchburg State since 2011. The award-winning author’s books include the memoir Breaking into the Backcountry (University of Nebraska Press, 2010), which tells the story of his time as the caretaker of a 92-acre homestead along the Rogue National Wild and Scenic River in southwestern Oregon. His writing can be found in recent issues of Orion, Electric Literature, AGNI Online, Terrain.org, and The Good Men Project. 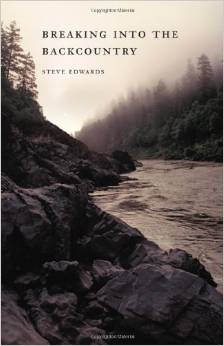 Edwards will be writing a series of essays about the experience of raising his young son, who has speech and language delays believed to be related to gastrointestinal issues.

“Writing about it has been so important to me,” Edwards said, describing the challenges created when his son went years without sleeping through the night as various specialists sought to determine the cause. “As a parent, this has been very difficult. For me as a writer, this has been an opportunity to investigate the range of emotions this puts you through. It changes the way you look at the world.”

Edwards teaches fiction and non-fiction writing and will teach a course in environmental writing this fall.

He said he was humbled by the fellowship from the Massachusetts Cultural Council, and noted the award will go toward “the babysitter fund” as he works on his writing project.

Get your copy of Breaking into the Backcountry today.