The Boston Marathon bombing in April 2013 was a moment we will never forget, and for Katherine Jewell, economics, history and political science professor, it was personal. 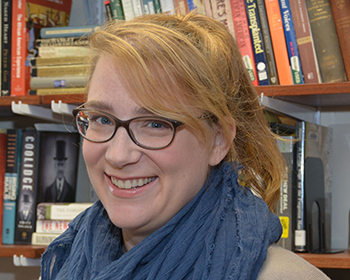 Jewell, pushing her 3-year-old son in a stroller, was close enough to the second explosion to feel the blast and smell the smoke. In the tumultuous days that followed, Jewell turned to her training as a historian in an attempt to make sense of the experience, chronicling the details, locations and conversations that erupted from the chaos.

That grew into a “crowd-sourced” oral history project, where Jewell collected other experiences from that fateful day and documented it online at Mapping the Boston Marathon 2013. In the months since its launch, the project is now part of the Our Marathon digital archive at Northeastern University.

The map is a place where anyone who experienced the Boston marathon bombing on April 15, 2013 can record their story. The database and map that the project seeks to build is not limited to those who were injured, or were otherwise near the blast site. Rather, it seeks to establish a collective narrative and sense of how the events spiraled out from the blast sites.

“This project brings together multiple voices and experiences to create a crowdsourced collective history of the events of April 15, 2013,” said Jewell. The data recorded will be publicly available and searchable for present and future research. “Together, these stories will not only record the experiences of Bostonians and their friends and family across the country and the world, but will also serve as a place of connection and reflection.”

The project has also inspired a classroom activity in which Jewell’s students analyzed raw historical artifacts to create narratives and question the reliability of sources.

To find out more about the project or to enter your story, visit Mapping the Boston Marathon 2013.