I've Got a Bad Case of Senioritis

So, I want to start off by saying that this first sentence alone has taken me about half an hour to write. I am not quite sure where my motivation went over break (probably somewhere warm!), but it seriously needs to come back. One of my friends described my current mood as a thing called senioritis.

Senioritis: noun. A crippling disease that strikes high school seniors. Symptoms include: laziness, an over-excessive wearing of track pants, old athletic shirts, sweatpants, athletic shorts, and sweatshirts. Also features a lack of studying, repeated absences, and a generally dismissive attitude. The only known cure is a phenomenon known as Graduation.

Yeah, that pretty much sums it up for me these days...only in college not in high school. It's probably a really good thing that I don't own any track pants or I would probably be looking like a slob. If I wasn't so worried about them getting damaged, I would probably be wearing my Hobbit slippers to school. 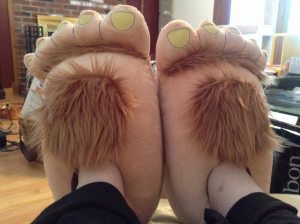 Look at those Hobbit feet!! Why would you not want to wear these everywhere?

Unfortunately, senioritis is not an acceptable illness as deemed by the school, so it looks like I am stuck in a bit of a rut. I know that once I get back into the swing of things for the semester, things will get easier, and I will be less lazy. I just wish that the time for that would come a lot sooner. Until that point, it looks like its going to be energy drinks and sugar highs to keep me going.

Speaking of which, It looks like it's about time for my Commonwealth of the Arts course. Hopefully I can stay focused through our lecture today....ZZzzzzzz!

Are you experiencing senioritis? Tell me about it.